Greyhound Pet Adoptions of Central Florida has been involved in the placement of retired racing greyhounds for over 25 years.

From 1997 to 2015, we orchestrated the transition of over 8,100 greyhounds into adoption.  In 2000, we acquired our own equipment and were involved in the shipping of greyhounds to qualified Adoption groups in non-racing states.  It was not uncommon to see our truck and trailers on the road with a cargo of greyhounds heading to their forever homes.

In 2008, President Dennis Tyler was recognized by the American Greyhound Track Owner Association  as “Greyhound Adoption Person of the Year”. 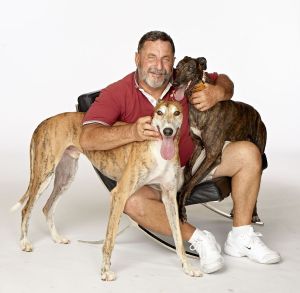 On August 1, 2011, Dennis Tyler was featured in the “Hero’s Among Us” section of People Magazine.  This subsequently lead to a special feature as a People’s Reader’s Choice Hero’s Among us contest in September 2011.  While the recognition was great, the publicity to promote greyhound adoption was even better.  Hundred’s of inquiries about greyhound adoption were received.

GPACF originally was a chapter with Greyhound Pets of America.  In September 2016, we procured our own 501(c)3 determination from the IRS and decided we could best serve the greyhounds locally and the national greyhound community by being an independent adoption group.